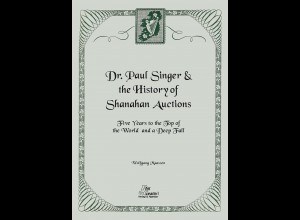 Five Years to the Top of the World and a Deep Fall Author: Wolfgang Maaßen In February 1954 a “Nobody” named Dr. Paul Singer appeared out of nowhere in a small suburb of Dublin, Dun Laoghaire. He turned the small furniture and estate auction company Shanahan into the world's largest stamp auction house. Singer magically attracted tens of thousands of customers from all over the world. He offered investment opportunities, as everyone was able to increase their money invested in stamps considerably within a very short time. Millions of British pounds flowed into the company, which in turn successfully invested them. Singer seemed to hedge investors and buyers against almost every risk. One could only win – one believed – and continued to invest. With the first “Millionaire” auction in November 1958, he was close to his goal. The gazettes of the world reported about his auction and a legendary party, at which 200 bottles of the best champagne delighted 200 or more guests, as well as the caviar ordered in Russia or the “ladies of the night” flown in from Paris. At the beginning of May 1959, Singer & Shanahan became a summit striker: Singer succeeded in acquiring the world's largest stamp collection of the tobacco tycoon Maurice Burrus. The success didn't seem to stop anymore. Until the night of 8/9 May, a mysterious collapse of this success story abruptly ended: The stamps for sale of the announced “Mystery Collection”, a unique huge collection of Lombardy Veneto, were stolen, the auction for the 5-year anniversary of the company cancelled. This was followed by the longest and most expensive investigations and trials in the history of Ireland. With a highly unusual course ... This exciting and in its form probably unique history is documented in the new 187-page hardcover book in due detail, whereby the author – a well-known philatelic historian – also brings in hitherto completely unknown information, e.g. on the origin of the Singer family. Equally unusual is a complete bibliography of all catalogues of the auction house at that time, because today only the last ones are known, but not the first ones. Among them is even the never sent auction catalogue for the planned 2nd Burrus auction of 13 June 1959, an auction that never took place and whose catalogues were almost completely destroyed. Even the last living contemporary witness, a former employee of the Shanahan company, Sydney Glass, was asked by the author for an interview and his surprising views can also be found in this book, as can so many other statements that have never been fully clarified to this day, which are dealt with in detail in this work and often also corrected. It is – not only because of its number of impressive illustrations – an entertaining book, almost a crime thriller, which shows what can happen when auctioneers leave the “Path of Virtue”. Format DIN A4, 187 pages, 272 images, full colour, hardcover. Schwalmtal/Germany 2019 1.030 kg 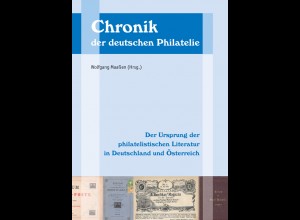 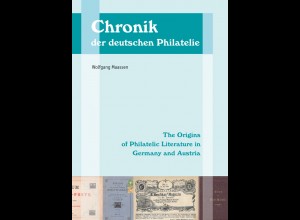 The Origins of Philatelic Literature in Germany and Austria

By Wolfgang Maassen Chronik der Deutschen Philatelie, Secial Ed. No. 16, Format DIN A5, hardcover, 64 pages, 84 colour images, © Schwalmtal 2019 Contents: Prof. Dr. Carlrichard Brühl in his “Geschichte der Philatelie” (History of Philately) 1985/86, Dr. Norbert Amrhein with his four-volume work “Philatelic Literature. A History and a select Bibliography” (from 1992) and Wolfgang Maassen/Vincent Schouberechts with their book “Milestones of the Philatelic Literature of the 19th Century” in 2013 published already first insight looks to this subject. At STOCKHOLMIA 2019, Maassen issued for the first time a small book in which exclusively the early German and Austrian philatelic literature of the years 1862-1872 was presented in greater detail and in its entirety. The first albums, lists/catalogues and the first magazines are presented in words and pictures, even the first monographs, which are hardly known today. What makes this book so special is the illustration of the titles described, because hardly anyone has ever seen these writings in the original. Maassen made this possible by visiting famous libraries, including the legendary Diena Library in Rome, now owned by Raffaele Diena. He was able to obtain further pictorial material in Berlin, Leipzig and London and many of it comes from his own possession. 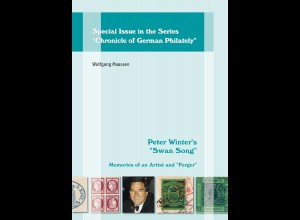 "Memories of an artist and "forger" More than the confessions of an impostor - A book about the life and work of the legendary stamp forger Peter Winter Size A4, hardcover with thread sewing, color printing, 200 pages, 280 illustrations, 35 of them in b/w, 1080 g, © Schwalmtal 2021, special issue no 17 of the series "Chronicle of German Philately" About the content: He was called the 'Kujau of philately', the last great forger after Jean de Sperati, a 'Till Eugenspiegel', a prankster, but also - according to others - a swindler or an impostor. Perhaps he was a bit of everything? After reading this new book by the well-known philatelic historian Wolfgang Maassen, you will be wiser. On a total of 100 large-format pages, the author traces the life and companies of the former opera singer from Bremen. He describes his origins and career, which, in addition to a quite noteworthy career as a singer worldwide, also included a hitherto little-known doctorate, but then points out his second career in philately, which had its beginnings in Bremen in the early 1970s. This was followed by the setting-up of a company called “Bruyere” there, a wine shop that also sold stamp replicas. Such ventures were expanded a few years later with the companies ProPhil Forum and the House of Stamps in Switzerland. By then, Peter Winter had long been attending the stamp fair in Essen with his own stand. The author devotes quite a lot of time to individual stories: the Heiner Faber case, the copyright dispute with the British Library in England, Winter's fantasy stamps, but also the 'coup' with the 1c British Guiana and the rare “Inverted Jenny”. Equally worth reading is the role played by philatelic societies at the time and Winter's dream of a documentation of his life's work. This did not come about, but this book did, in which the author, who had known Winter well for 20 years and was in constant contact with him, has portrayed Winter. He has also documented his work on about 100 additional pages, some of them with large colour enlargements. This documentation was only possible because international and German philatelists worked together and, in many cases, provided the author with previously unknown material and originals. Leonard Hartmann from the USA and the former auctioneers Wolfgang Jakubek and Hans-Joachim Schwanke were also involved. Jan Billion, publisher of the “Deutsche Briefmarken-Revue”, also opened his archives and, last but not least, Carl Walske † and Dr. Bohne †, whose archival material found its way to the author via Leonard Hartmann. The book is exciting and well worth reading. It is as entertaining as a novel and quite enjoyable in quite a few places. Peter Winter fooled everyone and not infrequently made fun of them. He played a joke on many, was a fun-loving character, but could also be vindictive. He will keep his place in the history of philately, which would hardly have been conceivable without this biography and documentation of his life's work. 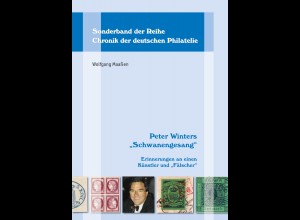 Maassen, Wolfgang: The Spiros – a Family from Hamburg

Forgers and Forgeries in the 19th Century A Tale of Fiction and Truth Corona, like many other things, had delayed the publication of this book. Now the first volume with 160 pages is available in full colour. The subtitle "A Tale of Fiction and Truth" already suggests that this research work by the well-known philatelic historian will also be able to present something significantly new. The name "Gebr. Spiro" or even "Philip Spiro" should be familiar to every advanced (professional) philatelist. These originators in Hamburg have been credited with the production and distribution of the first early imitations of stamps from countless countries for more than 150 years. They are supposed to be more than 150 different ones, which were marketed in huge numbers all over the world and can still be discovered today in numerous collections and albums. They were first called "facsimiles". For a long time, however, they have been classified as forgeries, even though they were probably originally intended only as gap fillers for beginners and student albums. The author immerses the reader in the early years of the beginning philately after 1860. He describes the emergence of the first forgeries and their resonance in the gazettes of the time (some of which are hardly known today). This literature study alone is already exciting, as one learns much that has never been published anywhere else. With the support of Hans-Peter Garcarek and Gerhard Lang-Valchs, Maassen succeeds in proving that the Spiro family were not the producers of these facsimiles, although the Spiro brothers (not Philip Spiro!) probably traded in them for a few years. But not for nearly as long as is repeatedly claimed to this day. The production was caused by others, both in England and in Germany. The family-historical research alone, compiled from the Hamburg State Archives, is an impressive innovation that exposes the previous "accusations of guilt" of countless authors as fairy tales and legends. In the second part of the book, the focus is then on the facsimiles themselves, which the author carefully and cautiously refers to only as "so-called Spiros". Colours, perforation, paper, printing process and stamps are closely examined and analysed. Many a surprising discovery comes to light. Even originals that have never been seen in any other publication before. Last but not least, the book also offers the first complete reproduction of the facsimiles falsely attributed to Spiro Bros. in the legendary "Spud Papers". These were already known in black and white, a few lucky people also had an original of the rare trade journal "The Philatelist" from the 1870s, in which the episodes of this series of articles had appeared. But there were considerably more than in "The Philatelist" - and this, which is missing everywhere, is also reproduced here in this book. The author answers the final question about a "closed book" only with caution - also with reference to an extensive volume 2, which is to follow in 2023. It is not a "closed book", but the beginning of a project that wants to bring more light into the darkness within the framework of the little that has been preserved. This volume 2 is to contain or compare all the facsimile sheets (approx. 1,300!!!) of the alleged Spiro imitations that have been submitted to the author up to now. One can be curious about the result. It is certain that this first volume will revolutionise research. Format DIN A4, 160 pages, full colour printing, more than 420 illustrations in b/w and colour, hard cover with thread stitching, in English language, Special Issue No. 18 in the series "Chronicle of German Philately", 45 Euro plus parcel postage. © Phil*Creativ GmbH, Schwalmtal February 2022