Maassen, Wolfgang: The Spiros – a Family from Hamburg 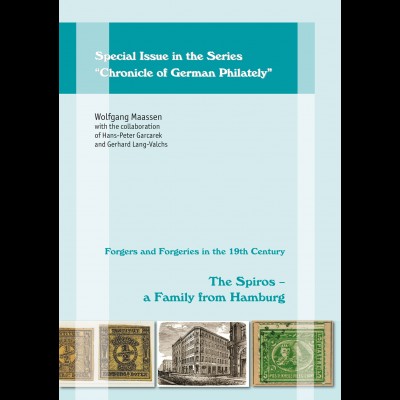 Forgers and Forgeries in the 19th Century

A Tale of Fiction and Truth
Corona, like many other things, had delayed the publication of this book. Now the first volume with 160 pages is available in full colour. The subtitle "A Tale of Fiction and Truth" already suggests that this research work by the well-known philatelic historian will also be able to present something significantly new.
The name "Gebr. Spiro" or even "Philip Spiro" should be familiar to every advanced (professional) philatelist. These originators in Hamburg have been credited with the production and distribution of the first early imitations of stamps from countless countries for more than 150 years. They are supposed to be more than 150 different ones, which were marketed in huge numbers all over the world and can still be discovered today in numerous collections and albums. They were first called "facsimiles". For a long time, however, they have been classified as forgeries, even though they were probably originally intended only as gap fillers for beginners and student albums.
The author immerses the reader in the early years of the beginning philately after 1860. He describes the emergence of the first forgeries and their resonance in the gazettes of the time (some of which are hardly known today). This literature study alone is already exciting, as one learns much that has never been published anywhere else. With the support of Hans-Peter Garcarek and Gerhard Lang-Valchs, Maassen succeeds in proving that the Spiro family were not the producers of these facsimiles, although the Spiro brothers (not Philip Spiro!) probably traded in them for a few years. But not for nearly as long as is repeatedly claimed to this day. The production was caused by others, both in England and in Germany. The family-historical research alone, compiled from the Hamburg State Archives, is an impressive innovation that exposes the previous "accusations of guilt" of countless authors as fairy tales and legends.
In the second part of the book, the focus is then on the facsimiles themselves, which the author carefully and cautiously refers to only as "so-called Spiros". Colours, perforation, paper, printing process and stamps are closely examined and analysed. Many a surprising discovery comes to light. Even originals that have never been seen in any other publication before. Last but not least, the book also offers the first complete reproduction of the facsimiles falsely attributed to Spiro Bros. in the legendary "Spud Papers". These were already known in black and white, a few lucky people also had an original of the rare trade journal "The Philatelist" from the 1870s, in which the episodes of this series of articles had appeared. But there were considerably more than in "The Philatelist" - and this, which is missing everywhere, is also reproduced here in this book.
The author answers the final question about a "closed book" only with caution - also with reference to an extensive volume 2, which is to follow in 2023. It is not a "closed book", but the beginning of a project that wants to bring more light into the darkness within the framework of the little that has been preserved. This volume 2 is to contain or compare all the facsimile sheets (approx. 1,300!!!) of the alleged Spiro imitations that have been submitted to the author up to now. One can be curious about the result. It is certain that this first volume will revolutionise research.
Format DIN A4, 160 pages, full colour printing, more than 420 illustrations in b/w and colour, hard cover with thread stitching, in English language, Special Issue No. 18 in the series "Chronicle of German Philately", 45 Euro plus parcel postage. © Phil*Creativ GmbH, Schwalmtal February 2022