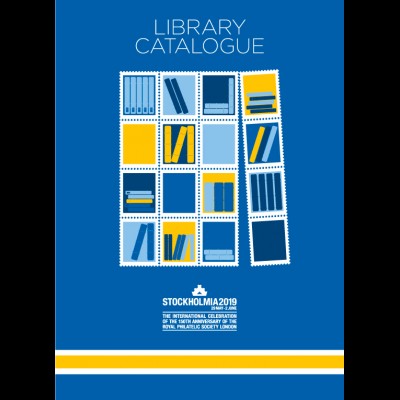 Review of Contents
The reviewer cannot remember a second philatelic exhibition for which two such extensive catalogues - one could rather speak of reference books - have appeared. With a total of almost 800 pages, these are available in two versions (soft and hardcover) and set standards in philatelic literature. Numerous advertisers and a great sponsor, namely Alan Holyoake from Great Britain, have made it possible for them to be sold so cheaply. Making the best of it was an obligation for those responsible for this mammoth work - Jonas Hällström for volume 1, Wolfgang Maassen for volume 2.

An exquisite library catalogue (Vol. 2)
Volume 2, the so-called “Library Catalogue”, is a comparable “unique specimen” (a term that philatelists are familiar with, since it characterizes “uniqueness”). The name of the catalogue sounds dry and uninviting at first, but this book written by Wolfgang Maassen unfolds its fascination while reading. For one does not only receive profound insights into the philatelic literature published by the “Royal” since 1873 (!), but also well-founded overviews of the titles which the association has awarded with the famous Crawford Literature Medal. Anyone who believes that something like this can also be found on the Internet is quickly misled. What the author documents here - including over 1,300 photos! - are so far unpublished data and facts with short book descriptions, which are however substantial. This book corrects many completely inadequate and incomplete lists, but it also encourages you to collect literature and enjoy its value and beauty.
The reader will be amazed to find out what all counts to the literature of this London Nobel club. Not only the well-known monographs, whose early titles are all rarities today. These include supplements to the association's own magazine “The London Philatelist”, reprints of articles, handouts to displays and meeting lectures at the Society, but also exhibition catalogues and electronic media for which “Royal” is responsible. Mårten Sundberg contributed a list of all known “handouts”, at least considerably more than 800, a list, which have not yet existed in this completeness.
1,2 kg